The history of the building

René Descartes, famous philosopher, was the owner of this beautiful and well-known farmhouse in the beginning of the 17th century. He obtained the title of « René Descartes, Seigneur du Perron ».

Lordship of the medieval era of the Middle Ages

According to written records at the Departmental Archives, the origins of this farmhouse go back to the 17th century. The farmhouse seems to be modest but is in fact a noble property which conferred to its owner the title of « Seigneur » ou « Sieur ». The possesion of a dovecote which had more than 600 pigeon holes was a privilege reserved to the nobility. Today, this gives a clear indication of the extent of private land given to the Perron. This priviledge was abolished by the French revolution, the night of 4 August 1789.

René Descartes, famous french philosopher, often boasted about being a "gentleman in Poitou". To this noble title inherited from his father was added the title of a small but noble land in the Province of Poitou, "the Perron". He inherited this land at his majority. Urged by his father, young Descartes had to sell his estates in order to obtain the responsibility of lieutenant in Chatellerault. But even if he sold the estate, a special clause made him stay "the Seigneur du Perron" during his entire life. That is why René Descartes often used this title and even signed some of his writings with the name of "Sieur" or "Seigneur du Perron". When the famous universalist died in Stockholm in february 1650, the mausoleum bore this inscription : « Renatus Descartes, Perronti dominus »

Since 1982, our family owns this estate for generations and live there as farmers did at that time. Harvests, hay making, grape harvests were favourable times for celebrations and gatherings at the Perron. During the following wars, the Perron welcomed prisoners and refugees who could find a new family there. After the farm works people used to stop by the Perron to chat and to have a strong home-made drink. Since those times, the Perron has kept the tradition of a warm and friendly place. Pascal Thiollet, the current owner, always wished to maintain the spirit of the Perron while reconciling, tradition with modern life. In 1998, helped by the whole family, he started important renovations to transform the farm into a small country hotel. "The Perron" again became a welcoming place.

Le Pigeonnier du Perron exists as a hotel since 2001. Today, Emilie Thiollet, the daughter of Pascal Thiollet, welcomes you in this charming hotel. 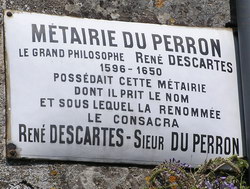 Plaque of the farmhouse of Perron